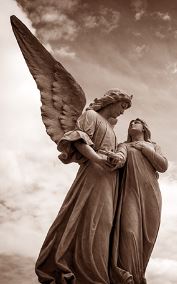 Mary C. McBride was born to Julius and Mary Rank on July 16, 1920 in La Unión, El Salvador. Her father was a Swiss chemist who worked in the gold mining industry. Her mother was a native of El Salvador.

Mary studied elementary education and became a schoolteacher. Around the age of 25, she immigrated to the United States where she became a United States citizen in the 1940’s. Mary settled in San Francisco where she married Silvio Gotelli, who passed away before her. She later was married to William McBride of Mansfield, OH who also preceded her. Mary lived a colorful, long life and enriched the lives of countless people. She will be deeply missed. Mary had a deep and abiding faith in the Lord Jesus.

Mary passed away peacefully in the home of her daughter, Giselle Russell of Elkhart, on Monday, March 9, 2020 at the age of 99 1/2. She is survived by her daughters, Sylvia Gotelli of Pinole, CA and Giselle (David) Russell; son, Oscar (Patricia) Gotelli of Prosper, TX; grandchildren, Rosina Rocco, Courtney Gotelli, Spencer Gotelli, Samantha Russell, and Aaron Russell; and great grandchild, Paisley Weber.

A visitation will be held on Saturday, March 14, 2020 from 1:30 – 2:30 at Billings Funeral Home, 812 Baldwin St. Elkhart, IN with a service to immediately follow at 2:30 with Father Jason Freiburger. In accordance with Mary’s wishes, cremation was chosen and will follow services. Memorial donations may be made out to Dementia Society of America, PO Box 600, Doylestown, PA 18901 and Center for Hospice Care of Elkhart, 22579 Old U.S. 20, Elkhart, IN 46516.

To send flowers to the family or plant a tree in memory of Mary C. McBride, please visit our floral store.