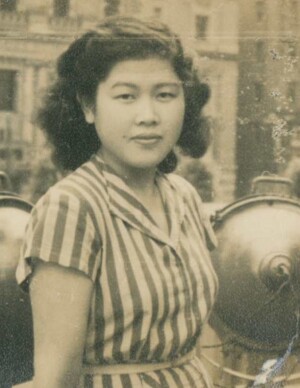 Keiko Goto, aka Kay Gene Mortimer, was born on January 24, 1928 in Beppu, Japan to Shinkichi and Chiyoko (Kanzaki) Goto. She lost her mother at a young age, and this event shaped her into the strong woman her loved ones knew her as, and allowed her to face challenges in life with grace and determination.

She moved to the U.S. in 1954 after marrying Ronald Swaim. She proudly became a naturalized American citizen in 1955. She then married, Robert C. Mortimer in 1964.

Kay was a talented artist and meticulous bookkeeper with Metaline Products and retired in 1994 from Adventures Unlimited aka Concord World Travel. She dedicated her life to providing for her children and grandchildren and especially her daughter, Denise.

Surviving her are her 4 children, Stanley J. (Trish) Swaim of Wichita, KS, Kevin G. Swaim of Indianapolis, Denise K. Swaim of Elkhart and Jo-Ann (David) Mortimer-Paulson of Elkhart; her 6 grandchildren, Lauren Swaim of Los Angeles, CA, Andrew (Kennya) Swaim of Seattle, WA, Christopher Swaim of Milwaukee, WI, Megan Swaim of Indianapolis, IN, Gabrielle Schleining of Carmel, IN and Maxwell Schleining of Elkhart; her sister, Atsuko Goto; her niece, Kaoru Goto; and her two nephews, Shinsuke Goto and Tetspei Goto, all of Japan.

There will be no services at this time.

Memorial contributions may be directed to Special Olympics of Elkhart County.

For those who wish to share a memory or write a condolence may do so at www.billingsfuneralhome.com

To send flowers to the family or plant a tree in memory of Kay G. Mortimer, please visit our floral store.

No services scheduled at this time