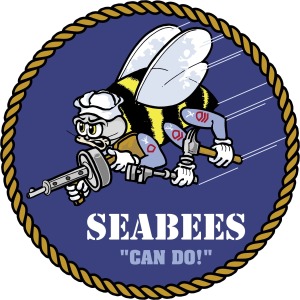 Mr. Donald Howard Pound, 89, passed peacefully with his loving family by his side on Sunday, May 8, 2022. Born in Jones, Michigan to the late Don Isaac and Mary (Byrd) Pound, Howard developed a deep love for the natural world around him and wanted nothing more than to spend his time outside, where the woods became his playground and his cathedral. He graduated Marcellus High School and entered the Navy where he served in the Naval Construction Battalion (AKA, the “SeaBees”, or “C.B.’s”), the force tasked with landing first in active combat zones to build the infrastructure to allow other military units to function. The Seabee motto was “Can Do,” an attitude Howard carried with him throughout his life.

After his honorable discharge from active duty in June of 1956, Howard had developed a new passion for heavy equipment and began a long career with Rieth-Riley Construction Company that took him all over Indiana building roadways and other large scale paving projects. He fell in love with his beloved bride, Victoria (Eden) Pound, in 1957, a moment he always described as love striking him “like lightning” when he saw her. They married October 6th, 1957 and had two children, Kim Annette Fix and Donald Howard (Viki) Pound, Jr., both of Chicago. After Howard retired in 1994, he acquired a new hobby, photography, which he enjoyed while traveling the world hiking with his wife. Even after retirement, Howard used his considerable prowess with heavy equipment to build a little piece of heaven on the back 40 of his childhood farm home, which he loved to share with family and friends. He was a gregarious, jovial, disciplined man of strong opinions and even stronger convictions. He was a warrior with a poet’s heart.

He is survived by his wife and two children, his granddaughter, Kiya Fix, Cincinnati, OH, a sister-in-law Lyn (Bill) Burns, nieces Laura (Mike) DeConcilis and Cassandra Burns, and grand-nephews William and Christopher DeConcilis. He was preceded in death by his parents and sister, Clarice Pound. The family wishes to thank the incredible hospice staff at Elara Caring, as well as the angels from Tender Love Care who provided 24/7 support to Howard and his family. We also want to express the deep love and appreciation for all of our friends and neighbors from the community and Central Christian Church who reached out and supported us in so many caring ways during this difficult time.

A visitation will be held at Billings Funeral Home on Sunday, May 15, 2022 from 12 noon until 2:00 pm. A memorial service will be at 2:00 pm, officiated by Pastor Doug Cripe of Elkhart’s Central Christian Church. In accordance with his wishes, cremation has taken place and military honors will be held just prior to the service by the US Navy Funeral Honor Guard and Elkhart DAV #19. Memorials in Howard’s name may be made to the Stephen Siller's Tunnels to Towers Foundation (https://t2t.org/).

To send flowers to the family or plant a tree in memory of Donald H. "Howard" Pound, please visit our floral store.

You can still show your support by sending flowers directly to the family, or by planting a memorial tree in the memory of Donald H. "Howard" Pound
Share a memory
© 2022 Billings Funeral Home. All Rights Reserved. Funeral Home website by CFS & TA | Terms of Use | Privacy Policy | Accessibility